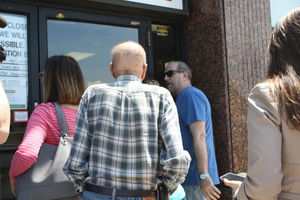 Monday, May 23, 2016 – Maspeth Federal Savings in Rego Park was the target of an elaborate break-in over the weekend, with dozens of safe deposit boxes burglarized.

The brazen bandits cut a hole in the roof of the bank to break in, shielding their entry point with wooden boards constructed around it. According to reports, an employee discovered the hole on Monday morning and alerted authorities.

Uniformed officers guarded the rear of the Woodhaven Boulevard bank while investigators were seen inside the venue meeting with bank staff into the afternoon. Outside the front entrance, a half-dozen angry customers banged on the locked front door and demanded answers.

“My whole life could be ruined,” said one man, who declined to give his name or discuss the contents of his safe deposit box with the media. “What’s the deal with this?”

A Rego Park resident named Dorothy said she and the other customers standing outside had yet to hear from bank representatives about their boxes, something she finds unacceptable.

“I don’t have money or anything but I have important papers,” Dorothy said. “Just let me know what’s happening.”

Bank officials could not immediately be reached for comment.

The burglary appeared to be planned well in advance, as the perpetrators cut a neighbor’s fence and hid a ladder inside a small space between his garage and the one next door.

Middle Village resident Frederick Magliolo said the vulnerability of the bank’s rear always has worried him, resulting in him removing the items from his safe deposit box 18 months ago.

“For this reason,” Magliolo said when asked why he took his belongings out of the bank. “I spotted this years ago.”

A stunned Maryann Morea, a customer of the bank for decades, said she rushed to Woodhaven Boulevard after hearing about the burglary.

“Oh my God, how much did they take?” Morea asked with her hands covering her mouth. “I’m panic stricken, I have to know if they got to mine.”