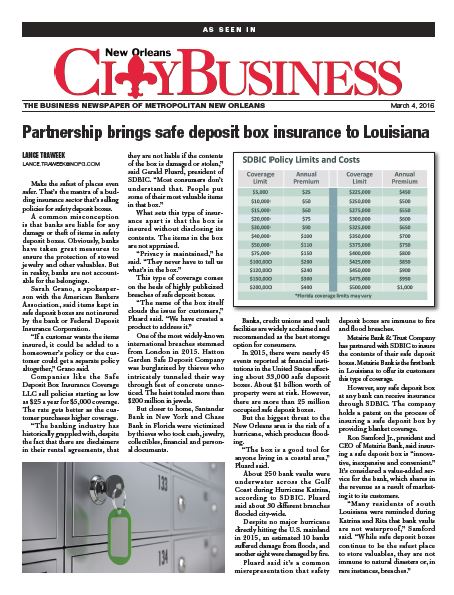 Make the safest of places even safer. That’s the mantra of a budding insurance sector that’s selling policies for safety deposit boxes.

A common misconception is that banks are liable for any damage or theft of items in safety deposit boxes. Obviously, banks have taken great measures to ensure the protection of stowed jewelry and other valuables. But in reality, banks are not accountable for the belongings.

Sarah Grano, a spokesperson with the American Bankers Association, said items kept in safe deposit boxes are not insured by the bank or Federal Deposit Insurance Corporation.

“If a customer wants the items insured, it could be added to a homeowner’s policy or the customer could get a separate policy altogether,” Grano said.

Companies like the Safe Deposit Box Insurance Coverage LLC sell policies starting as low as $25 a year for $5,000 coverage. The rate gets better as the customer purchases higher coverage.

“The banking industry has historically grappled with, despite the fact that there are disclaimers in their rental agreements, that they are not liable if the contents of the box is damaged or stolen,” said Gerald Pluard, president of SDBIC. “Most consumers don’t understand that. People put some of their most valuable items in that box.”

What sets this type of insurance apart is that the box is insured without disclosing its contents. The items in the box are not appraised.

“Privacy is maintained,” he said. “They never have to tell us what’s in the box.”

This type of coverage comes on the heels of highly publicized breaches of safe deposit boxes.

“The name of the box itself clouds the issue for customers,” Pluard said. “We have created a product to address it.”

One of the most widely-known international breaches stemmed from London in 2015. Hatton Garden Safe Deposit Company was burglarized by thieves who intricately tunneled their way through feet of concrete unnoticed. The heist totaled more than $200 million in jewels.

But closer to home, Santander Bank in New York and Chase Bank in Florida were victimized by thieves who took cash, jewelry, collectibles, financial and personal documents.

Banks, credit unions and vault facilities are widely acclaimed and recommended as the best storage option for consumers.

In 2015, there were nearly 45 events reported at financial institutions in the United States affecting about 33,000 safe deposit boxes. About $1 billion worth of property were at risk. However, there are more than 25 million occupied safe deposit boxes.

But the biggest threat to the New Orleans area is the threat of a hurricane, which produces flooding.

“The box is a good tool for anyone living in a coastal area,” Pluard said.

About 250 bank vaults were under water as a result of Katrina across the Gulf Coast, according to SDBIC.

Despite no major hurricane directly hitting the U.S. mainland in 2015, an estimated 10 banks suffered damage from floods, and another eight were damaged by fire.

Metairie Bank & Trust Company has partnered with SDBIC to insure the contents of their safe deposit boxes. Metairie Bank is the first bank in Louisiana to offer its customers this type of coverage.

Ron Samford Jr., president and CEO of Metairie Bank, said insuring a safe deposit box is “innovative, inexpensive and convenient.” It’s considered a value-added service for the bank, which shares in the revenue as a result of marketing it to its customers.

“Many residents of south Louisiana were reminded during Katrina and Rita that bank vaults are not waterproof,” Samford said. “While safe deposit boxes continue to be the safest place to store valuables, they are not immune to natural disasters or, in rare instances, breaches.”