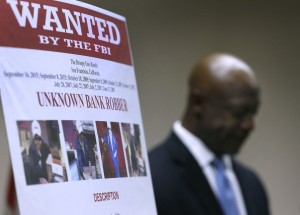 The FBI on Wednesday released a rogues’ gallery of “armed and dangerous” suspects in a string of Northern California bank robberies this year, hoping the public will help them nab the bandits before they strike again.

Although bank holdups have been on the decline in Northern California since 2013, the FBI’s plea for assistance came just two days after a U.S. Bank branch inside an El Cerrito Safeway was robbed of hundreds of thousands of dollars.

As they comb through video surveillance footage and other evidence in the El Cerrito case, authorities are entertaining the possibility that the robbery was an inside job. The suspect, whose gender has not been determined, passed a note to a teller demanding money and claiming to have a gun.

The FBI does not typically release how much loot is taken in bank heists, but police estimated the loss as hundreds of thousands of dollars. Authorities are pursuing various leads, and no arrests have been made.

“We don’t live in vacuums,” Bertram Fairries, FBI assistant special agent in charge of the bureau’s San Francisco field office, said at a news conference. “There is somebody somewhere out there who knows who that individual is.”

As of this week, the FBI’s Northern California district, which encompasses coastal counties from Monterey to the Oregon border, has seen 102 bank robberies — the seventh-highest figure for the nation’s 56 divisions.

Fairries said the bandit is known to target banks in Asian neighborhoods. Authorities believe the man, estimated to be in his 60s, committed two robberies in 2009 and six in 2007.

Several cases this year involved bank robbers taking hostages. On Nov. 9, three men wearing painters’ masks, tinted glasses and bright construction vests burst into a Wells Fargo Bank in Salinas and took employees and customers hostage. Officials said the suspects threatened to kill the hostages but that no one was injured. The FBI is offering up to $10,000 reward for information leading to their arrests and prosecution.

In a July 13 case at a Liberty Bank in Felton (Santa Cruz County), a man forced employees and customers into a vault and then fled on foot with “a large sum of money,” according to the FBI.

Authorities say the suspects in all the cases should be considered armed, although some weapons were more conspicuous than others. On June 12, three suspects wielded firearms when they robbed a Wells Fargo Bank in Greenfield (Monterey County). In a Nov. 21 heist, two masked men armed with guns robbed another Wells Fargo Bank, this one in Campbell. Several other suspects helped them get away using two stolen vehicles, officials said.

But FBI officials emphasized Wednesday that bank robberies seem to be on the decline. In 2014, the Northern California division reported 152 bank holdups, and in 2013 it saw 229.

Justin McCrary, a UC Berkeley School of Law professor whose expertise includes law enforcement, was not surprised that the number of bank robberies has sharply declined. Although the psychology behind bank robberies hasn’t changed much, he said, banks have been successful at limiting the amount of cash on hand and initiating other “target hardening” efforts.

“It’s not as lucrative today,” McCrary said. “It’s either a crime of desperation or a crime of the uninformed.”