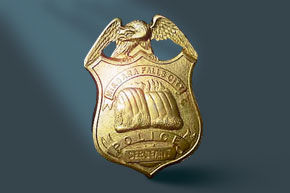 A Lockport man who was picked up by New York State Police early Saturday morning on the Thruway when his car ran out of gas was formally charged with bank robbery and attempted bank robbery on Tuesday.

U.S. Attorney William J. Hochul Jr. said David E. Foltz, 34, Lockport, was charged in relation to incidents in Rochester and Brockport. The charges carry a maximum sentenced of 20 years in prison and a $250,000 fine.

Assistant U.S. Attorney Charles E. Moynihan, who is handling the case, said on Aug. 12, Foltz entered the Canandaigua National Bank and Trust on Alexander Street in Rochester. Foltz approached a teller and indicated that he wanted to open an account. After a short time, Foltz was taken into the office of a manager at which time he asked once again about opening an account as well as a safe deposit box. Foltz asked to go to the safe deposit box area but was told he could only go to the area if he purchased a box.

At that time, Foltz lifted up his shirt revealing a black box with green buttons and black wires and a black handgun. Foltz stated “I’ve got this and this, so take me back to the vault.” The defendant then ordered the manager to get all of the $100s, $50s and $20’ from the tellers.

On Nov. 12, Foltz entered the Chase Bank branch on Main Street in Brockport. After waiting in line with several other customers, Foltz left the bank appearing agitated and rushed. He returned about 30 minutes later and got back in to the teller line.

Foltz once again inquired about opening an account and a safe deposit box. After adjusting his shirt, a bank employee noticed what appeared to be the handle of a gun and activated an alarm. Foltz asked twice if the alarm was activated but the employee did not answer. At that time, Foltz left the bank without any money. After reviewing surveillance photos, law enforcement officers believe Foltz was once again wearing a bullet proof vest.

According to the complaint, Foltz committed similar incidents on Nov. 14 in Brooklyn and Dec. 4 in Erie, Pennsylvania.

Early Saturday morning, a New York State trooper spotted a disabled vehicle about 12:30 a.m. Saturday along the eastbound lane of the 1-90 in Pomfret. Foltz told the trooper the rental car had run out of gas.

A computer check determined that the FBI office in Buffalo had issued an arrest warrant for Foltz, charging him with bank robbery. He is suspected of robbing several banks throughout the state.

Foltz made an initial appearance before U.S. Magistrate Judge Jonathan W. Feldman and is being held pending a detention hearing set for 3:30 p.m. Wednesday.

The fact that a defendant has been charged with a crime is merely an accusation and the defendant is presumed innocent until and unless proven guilty.