BLUEFIELD — A fake bomb left at a Bluefield bank following a robbery this week was made with such realism that it included a timing device and wires running into a black bundle.

This information was revealed by authorities Thursday when new details about Tuesday’s Bluefield bank robberies, and subsequent shooting of the suspect by police after a gunfight downtown, were revealed.

The first sign of trouble was reported at 9:04 a.m. Tuesday when multiple alarms came in to Mercer County 911 reporting a robbery at First Century Bank on Federal Street, said First Sgt. R.A. Maddy, district commander of the Mercer, McDowell and Monroe detachments of the West Virginia State Police and lead investigator on the case. 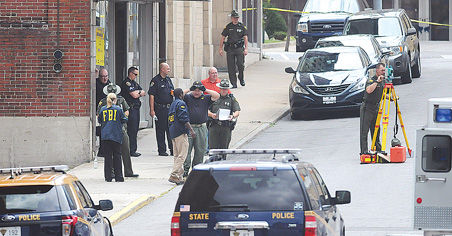 “He was on a bicycle,” Maddy said. “We’ve been provided with video footage that shows the suspect riding the bike toward First Century Bank. He entered the bank and produced a revolver.”

Maddy said the suspect, Cedric Maurice Williams, 33, of Bluefield, who was later shot and killed by Bluefield Police Department officers, was armed with an AK-47 on a sling and a 1911 Army issue .45-caliber-handgun. During the course of Tuesday’s investigation, authorities also discovered a .38-caliber revolver tucked into the waistband of Williams’ pants.

“He entered First Century Bank and produced a revolver,” Maddy said. “He robbed three tellers there. And, after hitting all three of the tills, that’s when he placed what we thought was an improvised explosive device (IED) in the bank. He made a statement to the effect of, ‘You guys need to get out of here. I’m going to level the whole block.’”

Maddy said Williams went so far as to manipulate the timing device on top of the suspect device.

“It did look like a bomb,” Maddy said, describing the device as approximately 18 inches in length, with a digital timing device on top attached to red and black wires that disappeared into the interior of the device — a large, black bundle concealed with duct tape.

It was this realistic look that spurred the “abundance of caution” and evacuation of downtown Bluefield, Maddy said.

Maddy said the manager of First Century Bank gave employees the order to evacuate, which they did.

Williams then left the bank and continued down Federal Street on his bicycle to First Community Bank. Maddy said Williams was dressed in black and was wearing a mask. He also carried a backpack.

Williams entered First Community Bank and proceeded to rob it, Maddy said. At that point, alerts went out about the second bank robbery.

“Bluefield Police Department officers were in very close proximity to First Community Bank, en route to First Century Bank, when that call came in,” Maddy said. “It was a very quick response.”

Maddy said witnesses at First Community Bank said the police were there “in seconds.”

“They immediately set up a perimeter around the bank,” he said.

In an earlier account, Bluefield Police Chief Dennis Dillow said officers were stationed at the front and back of the bank.

Dillow and Det. K.L. Adams were at bank’s back exit when Williams attempted to exit.

“He first shot at me there,” Dillow said.

The chief said he “bailed out of the vehicle” and took cover as Williams fired rounds. Dillow’s cruiser was riddled with bullet holes, many of which penetrated the door and door jamb.

Williams then re-entered the bank and attempted to leave through the front exit. There, he encountered more officers and gunfire was exchanged.

He then, again, tried to leave by the back exit, but was met by Dillow and Adams.

“The first shot I took at him I disabled his rifle,” Dillow said. “The good Lord was looking after us.”

Dillow said he was shooting at the suspect’s chest when he hit the slide-action mechanism of the AK-47 causing it to jam.

“He had it on a sling and dropped it to the side, and pulled out a handgun and continued shooting,” Dillow said in an earlier report. During the heat of gunfire, Dillow thought the shooter was simply out of ammunition. It was not until later, during the crime scene investigation, that he learned that he had disabled the weapon.

Authorities on scene the day of the incident told the Daily Telegraph that the rifle’s magazine held many more rounds of ammunition.

Williams was killed during the gunfight with Bluefield Police Department officers. It was after this shooting that authorities discovered the hidden .38-caliber revolver.

The West Virginia State Police bomb squad removed the suspicious device from First Century Bank and took it to a remote place to detonate. Maddy said that is when it was learned that the device was a fake.

Yet all precautions were taken during the removal of the device. “We shut down Route 460 from the time the device was transported from the bank to the area where it was detonated,” he said.

“An undisclosed amount of money was taken from both banks,” Maddy said, noting, however, that all the cash was recovered.

Maddy praised the many units of the West Virginia State Police who assisted with the investigation, including those with the Princeton, Beckley, Parkways, Whitesville and Hinton detachments.

He said their assistance is of great help to the investigation.

Maddy said a search warrant was also executed on Williams’ residence Tuesday evening. “During that search, evidentiary items of interest were collected that we feel will help link him to the crime that was committed.”

Marijuana plants were also discovered during the search, he said.

Maddy said the investigation into the case is ongoing.

Once the investigation is complete, reports and evidence will be submitted to Mercer County Prosecuting Attorney Scott Ash who will decide whether or not the case will be presented to the grand jury.