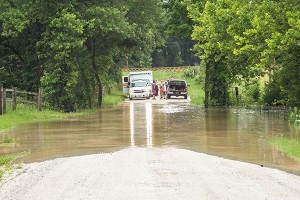 LINCOLN COUNTY, MO  – First responders are putting in overtime Sunday as law enforcement and fire agencies in Lincoln County have been rescuing residents since early Sunday morning. So far, over 20 people have rescued from their homes in and around Silex and Davis Missouri.

In Silex homes and businesses were flooded. Six business including a funeral home, a bank, a lumber yard and a convenience store were surrounded by water.  The ball fields at the local high school went under.

The last time this happened was in 2008 when the remnants of Hurricane Ike drenched the area.  After that happened many citizens moved to higher ground.  Officials say there was a plan to also move businesses but that did not happened in time.

The Lincoln County Fire Protection District #1 is providing temporary shelter for those rescued, while the American Red Cross is on scene to provide further assistance to those displaced the flooding. But the county’s problems don’t stop there. Rising floodwaters from the Mississippi River, the Cuivre River and other local stream and creeks is forcing local authorities and the Missouri Department of Transportation to close roads. Overnight over 4” inches of rain fell in Lincoln County forcing many rivers, creeks and streams out of their banks, with more rain expected into Monday.

As of Sunday evening all lanes of U.S. 61, Avenue of the Saints, one mile north of Troy at the Cuivre River Bridges have been closed due to flooding are closed due to high water. Highways Route 79 and U.S. 54 have intermittent closures due to flash flooding.

Authorities are urging motorist to used state marked detours to navigate around flood areas and roads.

Another problem facing county officials is a railroad track near Old Monroe and Route 97 that’s had its bedding washed out. Officials have closed off the area over concerns that the levee the track is on may collapse.  A BNSF Railway spokesman says it is a main line and carries an average of 30 trains a day.  Some trains may have been rerouted, others waited until repair were made.  Crews hope to have the tracks back in order around midnight.