Lubbock Hospitals, Bank, other Businesses Among those Affected by Flooding

Lubbock Hospitals, Bank, other Businesses Among those Affected by Flooding 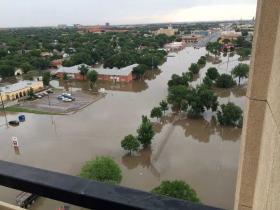 “There has been some minor leakage in older parts of the buildings, but patient care has not been affected,” she wrote.

According to one Facebook poster, the Wells Fargo building in Lubbock experienced flooding and authorities debated whether or not to close it for the day around the early afternoon.

Matt Dowdy, assistant director of athletic communications, said the stadium had cleared of water by 4:20 p.m.

“The photo that was taken earlier was a photo from immediately after the storm,” he said. “Our drains on the stadium have worked the entire time. I’m actually looking out at the stadium turf right now and it’s almost all clear.”

Another Facebook post shows flooding just inside the door of Aaron’s at 19th Street and University Avenue.

Water had receded from many of those roadways, though Avenue Q remained under water.

Firefighters in a dive boat rescued five people from high water around 25th Street and Avenue Q, according to the LFR Facebook page, while two homes near 23rd Street and Avenue W were evacuated after taking in more than a foot of water.

Roads were passable near Maxey Park soon after the rain stopped, but water was rapidly crossing 24th Street into the lake there and barricades were posted.