HUMBOLDT – The city’s police chief called it a miracle that a bank employee who was kidnapped from her home and shot in an attempted robbery is expected to recover. Local and federal authorities also are grateful that a suspect was quickly arrested following the shooting Wednesday morning at BancorpSouth in downtown Humboldt.

The victim, Pamela Janeice Frisbee, was recovering at the Regional Medical Center in Memphis, where she was listed in serious condition Wednesday evening.

“For those of you who do not believe in miracles, guess what, we had one today in our town,” Humboldt Police Chief Robert Ellis said at a news conference Wednesday afternoon. “We had a miracle today. We had a really horrible situation that could have turned out extremely bad, (but) we have a person who is going to be OK.”

Todd McCall, special agent in charge of the FBI’s Memphis Division, said Dominic Shawn Williams kidnapped the victim at gunpoint at her home just before 8 a.m. Williams forced Frisbee to drive to her workplace, BancorpSouth at 1500 E. Main St., which is a short distance from her home, police said. 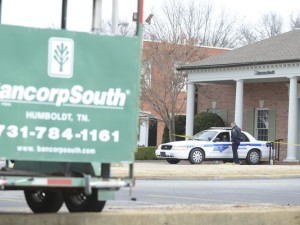 According to McCall, Williams wanted to get into the bank vault, but Frisbee did not have authorization to open the vault. Williams panicked and shot Frisbee multiple times, he said. Williams then shot out a window and climbed out of it into a neighboring yard, he said.

Other bank employees were walking in and dialed 911. Humboldt police responded immediately and Ellis had apprehended Williams a short time later.

“Due to the incredible efforts by the entire department and quick response, this subject was apprehended incredibly fast,” McCall said.

Law enforcement did not release the victim’s name, but friends identified her as Pamela Janeice Frisbee. The Med in Memphis confirmed that Frisbee was admitted to the hospital and was listed in serious condition. Authorities also put up crime-scene tape and were taking photos at Frisbee’s house on Main Street. Property records list the house as belonging to Pamela J. Frisbee and David M. Frisbee.

Virginia Blakemore lives across the street from Frisbee and said she couldn’t believe what had happened.

“She’s one of the best,” she said. “She’s very loving and sweet. She’s everybody’s friend. Really, she’s a great person.

“If it happened like what they said, he followed her to the bank, (then) she probably prayed all the way over there ’cause she’s a good, Christian lady,” Blakemore continued. “And that probably helped save her.”

Ellis said Frisbee is recovering well, but she will continue to need help moving forward.

“I would really like for the people out there to pray for our victim … this is going to be a hard road. Not just today, but what’s ahead is going to be very difficult,” Ellis said.

Williams, 39, from California, is charged with attempted bank robbery, felon in possession of a firearm and use of a firearm while committing a violent crime, authorities said.

Williams’ case will be heard in federal court in Jackson.

The investigation is being conducted by the Humboldt Police Department, Gibson County Sheriff’s Office and the FBI.

Humboldt schools were put on lockdown following the incident, but the lockdown was lifted after the suspect was taken into custody.

Blakemore said crime in Humboldt is becoming a concern. “Yes, it’s a concern because I have children here,” she said. “I never have kept my doors locked in years and years and years of living here, but I do now.”