Kokomo Under State Of Emergency After Tornado Hits 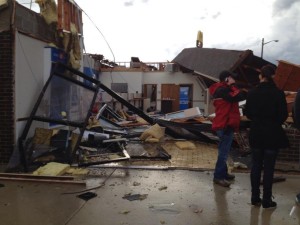 Kokomo Under State Of Emergency After Tornado Hits

A tornado in Kokomo inflicted damage on several homes and buildings. The city has issued a state of emergency until 6 a.m. Monday morning.

A tornado that touched down in Kokomo this afternoon damaged many properties and left thousands without power.

Around 16,000 people are currently without power. No fatalities have been reported.

The Kokomo police have issued a state of emergency until 6 a.m. Monday. Schools will be closed and trash will not be picked up.

A Red Cross shelter is being set up at the Ivy Tech Event Center on North 31.

The city police department announced via Twitter Kokomo residents should stay off the streets and those that are out could be subject to arrest.

Governor Mike Pence said 15 counties, including Howard County, are reporting damage. He says Kokomo, Lafayette and Washington, appear to have received the most damage.

Mandy Urbina works for Disaster Services in Kokomo and helped set up a disaster shelter at the Ivy Tech event center. The center is providing food, shelter and clothing to those affected by the tornado.

Urbina says the Red Cross and other emergency relief agencies working together to reach out to county residents that have been affected.

“First thing in the morning we are going to get our damage assessment teams out to assess the situation and that way it will give us more knowledge of how long the shelter needs to be open and how many families have been affected that we could reach out to.”

State officials are working to assist local emergency management agencies and are assessing whether to classify any part of the state as a disaster area, which would qualify it for federal funding.

“We are wanting to follow the lead of the local jurisdictions,” Pence said. “Once they get a handle on what their needs are providing personnel and resources to help them put their communities back together will be a real focal point for us.”

There have been no reported deaths in the state.