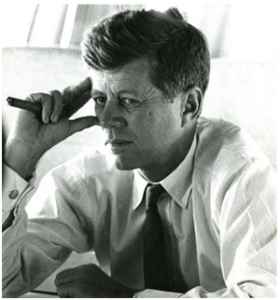 Treasured images by John F Kennedy’s personal photographer whose archive was mostly wiped out in the 9/11 attacks on New York have gone on show in London.

The vintage and fine-art prints by Jacques Lowe have gone on display at the Proud Chelsea gallery in London, along with ashes from the photographic negatives destroyed in 9/11, to mark the 50th anniversary of the former US president’s death on 22 November.

The photos were printed and signed before Lowe’s death in May 2001 four months before the terrorist attacks of 11 September that year.Jacques Lowe became JFK’s personal photographer after documenting his presidential campaigns.

He had stored his archive in a safe deposit box at JP Morgan Chase bank which was located in a building next to the twin towers destroyed in the 9/11 atrocities.

The pictures represented almost all of the photographer’s Kennedy images most had never been published. His family say they were so valuable that no company would insure them.

‘I went with him on countless occasions to retrieve or return negatives,’ recalls Jacques’ daughter, Thomasina.

‘There was always an air of solemnity in the room… as if what we were about to see and touch would bring us closer to something historic.’

After months of campaigning to retrieve the contents of the safe, Thomasina found that the negatives had been reduced to a pile of ash and debris, though the safe was intact – the discovery exclusively reported by Amateur Photographer (AP) when Thomasina spoke within minutes of her trip to the scene in March 2002.

‘From the ashes that I held in my hand that morning I have tried to rebuild my father’s archive,’ adds Thomasina.

Later that year it emerged that around 180 negatives from the archive had escaped 9/11.

Thomasina discovered that they had been removed from the safe for printing prior to the attacks.

The surviving negative strips represented five of her father’s films and most of the pictures had never before been published.

Six years ago, Lowe’s family accepted an undisclosed sum from JP Morgan Chase over the loss of the archive.

The pictures have also been published in a book, My Kennedy Years: A Memoir by Jacques Lowe.

May 2001: Jacques Lowe dies aged 71 leaving his archive of 40,000 Kennedy images in the safe, housed in a vault at number 5, World Trade Center

10 November 2001: The bank writes to Jacques’ daughter, Thomasina, saying it is ‘unsafe’ to recover the bank vault or its contents

3 December 2001: The bank reveals that the safe deposit boxes in the vault are ‘unrecoverable’. It says that the extreme heat and weight of debris not only severely damaged the vault’s structure but also either disintegrated the contents or severely damaged the boxes, making them ‘inaccessible’. Fearing the images could be lost forever, Thomasina launches a campaign to persuade the bank to sift through the ruins, rather than dispose of the contents along with other rubble that remained on the site when the building was demolished

6 February 2002: JP Morgan Chase writes to say it has rescued Jacques Lowe’s safe deposit box from the rubble. However, it adds that the contents may have suffered ‘extensive damage’ and suspects the destruction of any papers in the box. The bank offers to consider claims for costs incurred in replacing documents and refund one year’s rent on the safe deposit box. It also invites Thomasina to make an appointment to visit her father’s box for a formal inspection

14 March 2002: Having flown out from her home in London, Thomasina opens her father’s safe deposit box, only to find that all that remains is a handful of debris

June 2002: AP reveals that 180 negs from the archive had escaped 9/11, having been removed from the safe prior to the attacks. Among the images was JFK’s first ever meeting with Soviet leader Nikita Khrushchev

November 2007: Jacques Lowe’s family accept an undisclosed sum from JP Morgan Chase bank over the loss of the 40,000 negatives