‘If he could get away with it here, no lock in the world is safe’

‘If he could get away with it here, no lock in the world is safe’

You wouldn’t necessarily notice them at first, anonymous figures in anonymous clothes, indistinguishable amid the daytime rush of pedestrians on a busy central London street. But they’ve noticed you. Hatton Garden, in Holborn, is the undisputed centre of Britain’s gold and diamond trade, and its tightly knit community of jewellers have hired security to match: burly, watchful men on almost every street corner, the ridges of bulletproof vests only faintly visible beneath their T-shirts. A concealed radio network keeps them constantly in touch, and if you start asking questions at any one of the Garden’s cramped jewellers’ premises, everyone else will know within seconds. Inside one shop, a guard from the street happens to have popped in for a cup of tea a moment earlier, but it’s not a coincidence. “We knew you were coming,” he says, amiably enough. “We’ve got someone on you.” 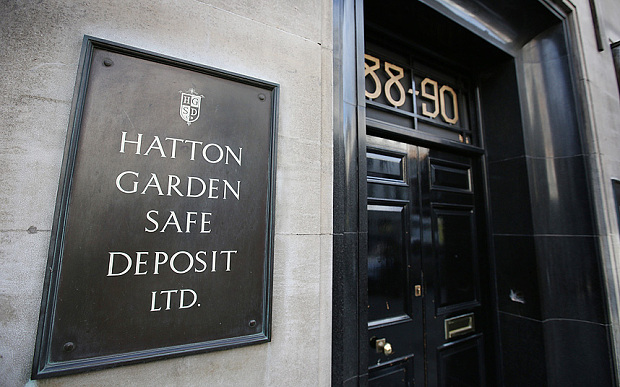 They would have noticed the man calling himself Philip Goldberg, and also Luis Ruben, and perhaps also Ruben Luis, when he first started appearing in the neighbourhood last November, but he wouldn’t have aroused their suspicion. A dapper gentleman, apparently in his 50s, dressed in a dark suit, a tie and a homburg hat, he didn’t stand out among the traditionally dressed men of the Garden, many of whom are orthodox Jews. His behaviour was similarly unremarkable: he brought diamonds for jewellers to examine and, much like any dealer, he would frequently enter the grand stone doorway of 88-90 Hatton Garden and disappear down the dark green linoleum staircase to the basement, home to the Hatton Garden Safety Deposit Ltd, where he would visit the four strongboxes he had hired there in a vault measuring 15 feet square.

His final visit, at 9am on the last Saturday in June, might have seemed a little strange in retrospect: it was the Jewish Sabbath, and too early for the shopping crowds; the Garden would have been largely deserted. But it wasn’t until the Monday morning, when a customer of the safety deposit found his box glued shut, that Hatton Garden realised what had happened: at least £1.5m in jewellery and cash had vanished from several boxes on the premises, and the well-dressed gent had vanished too, in what appears to have been one of the best-planned and most audacious jewel heists in recent British history.

Detective Inspector Pete Milner, of Holborn CID, has, consequently, something of a job on his hands. “It would appear that this was a well-planned and sophisticated theft,” he said this week, as he released CCTV footage showing the man – apparently about 6ft 4in – entering and leaving the safety deposit with an unmarked black holdall. “He established himself in the community, becoming known, visiting people regularly, so that he’d never look out of the ordinary.”
Already, yesterday, Goldberg/Ruben seemed to be acquiring the status of an urban legend in Hatton Garden – a man known to one’s acquaintances, rather than to oneself, and someone whose nerve and evident talent was thought deserving of some kind of grudging respect.

“If he could get away with it in the safety deposit, no lock in the world is safe,” says one gemologist, sitting behind rows of glass and dark-wood diamond cabinets lined with red velvet. In common with many on the street, she won’t give her name or allow the name of her shop to be used. “This trade is such a closed shop, you can’t just show up from nowhere,” adds her colleague, referring to the thief’s mysterious origins. “Somebody screws over a dealer, say, you won’t do it again. Your picture will be faxed to everyone else within minutes.”

In the shadowy, humid interior of Andrew R Ullman – dealers in gold, silver, gems, and hundreds of antique fob watches – Jeffrey Pinkus explains that he knows one of the thief’s victims. “He went to his box on Monday morning and it was glued shut. Even the black box from inside the safe, which they put everything in, that was gone, too. Well, can you imagine? You’d have a heart attack.”

How did he do it? The first part of the plan – and only the first part – seems relatively clear. In November, the man, giving his name as Goldberg spent about £900 on four strongboxes, dotted around the vault, meaning that he would have an apparently legitimate reason to be lingering in the room. He made conversation with other regulars, presumably winning their trust. And he sought to establish his credibility by taking a diamond to some of the Garden’s dealers. “He offered stones to one or two of our members,” says Harry Levy, vice-president of the London Diamond Bourse, the city’s most exclusive commodity exchange. “There was this one particular large stone he was touting, but whether it was real, who knows? If he was using it as bait, he probably wouldn’t show it too closely.”

Beyond that, though, the Goldberg/Ruben story quickly becomes much cloudier. The safe deposit works on a two-key system: customers have one key, and the deposit staff have another key – the same for all boxes. Without both being used simultaneously, the box cannot be opened. Even if the culprit could have obtained a copy of the safe deposit’s master key, therefore, he would still have had to obtain copies of the individual keys for the boxes from which he stole. Nor does he appear to have used force: police won’t confirm this, but the unanimous view among jewellers is that no device, mechanical or laser-powered, could slice through the tungsten and thick steel of the deposit boxes. A forest of CCTV cameras was meant to be watching every stage of his visit, and it remains unclear whether there is any footage of him inside the vault.

DI Milner says he has his theories, but, unsurprisingly, he isn’t sharing them. “When I’m sitting across from him in a room, asking him how he knows this or that, I don’t want him to be able to say he read it in the paper.”

The Garden, though, is buzzing with potential explanations. “Somehow he must of got a copy of those keys,” says Pinkus. “Maybe he knocks a key out of someone’s hand, as if by accident, and as he picks it up to give it back he takes an impression on wax in his palm?”. Trickery involving hypnosis is another possibility, one jeweller asserts confidently. “I’ll never forget, my mother, years ago – she had a couple come in this shop to look at a very expensive diamond. Neither one of them touched it at any time. I was very nervous. We were all watching; we had a custodian in the corner who was watching. Then the man made my mother wrap the ring and seal it in tissue paper. They left the shop, saying they had to go and get the money.

“And then I had a horrible feeling. I made my mother open the package. She didn’t want to. But in the end, she opened it. There was no ring. Eventually we got in touch with Paul Daniels. He told us there were a whole lot of ways it could have been done.”

Security experts, to be fair, seem equally baffled. Since Hatton Garden’s private security force was introduced two years ago, smash-and-grab robberies have all but vanished; the big risk now, jewellers say, is from fake stones and items worth less than they appear to be. The street also surfaces occasionally in press reports as an actual or potential site for attempts to fence stolen diamonds, for example those taken during a jaw-dropping £65m raid in Antwerp earlier this year. But simply finding a way to open a handful of the street’s safety deposit boxes?

“I know of only one [in the UK], and that was an inside job, an overnight job, and it was one of the guards involved,” says Jim Hill, who works with the organisation Trace to help police recover and identify stolen arts and antiques. “You’re looking at an extremely clever locksmith. If there’s no damage to the locks themselves, then he obviously has got keys made to fit each individual lock… but I’m just guessing the different methods.”

If the case is ever resolved, it will not, perhaps, be all that surprising if the culprit’s technical tricks turn out to have been of secondary importance to his personal qualities: charm, calmness, and the priceless ability to blend into his environment. “It’s a wonder,” says Harry Levy, at the London Diamond Bourse. “He’s a clever one, that.”

In the dingy fluorescent light of the Hatton Garden Safety Deposit, an attendant waiting behind a barred window says only that he’s saying nothing, and neither will anyone else at the company, leaving the street’s jewellers with little to do but to wait – and to wonder how a man with three names and no pedigree in the industry could have cheated their experienced acquaintances out of so much. They may be wondering for some time: the thief had a day and half to get away, and it is unlikely to have been beyond his proven abilities, and his knack for planning, to have booked a plane ticket in advance.

“Most of the stuff he took – diamonds – well, you can just put it in your pocket,” says Pinkus, laughing at the nerve of it. “He could be in South America by now.”